Topic – Spanish Golden Age as an intro to the Age of Absolute Monarchs.  This is an excellent lesson to use for cross-curricular efforts with art and language arts teachers as well.

If the powerpoint or videos do not download for you – please email me at historycomicsguy@gmail.com and I would be happy to help.

The Complete Don Quixote. Adapted and Illustrated by Rob Davis. Self Made Hero. 2013. ISBN 9781906838652. (This is a graphic novel adaptation using more contemporary language.)

1. Students will have read a textbook selection and answered some basic questions about absolutism and Philip II.  Class will begin with a do now to discuss and to create a definition of this term in small groups.  (We use a Frayer model to guide the thinking and defining.)

2. I will then introduce to Spanish Golden Age and don Quixote.

3. Students will then read through pp. 10-14 of the graphic novel version of the text.  Their mission is to use both textual and pictorial evidence to begin creating a character sketch of Quixote.  Students will pair/share and then we will have a class discussion on what was seen and read.  I make sure that the students fully understand the innuendos present in the drawings and how they add to the prose.  (The empty wine glasses strewn about, the “crazy” eyes of Quixote, the look from Dulcinea, etc). 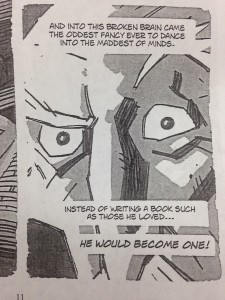 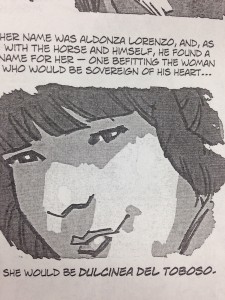 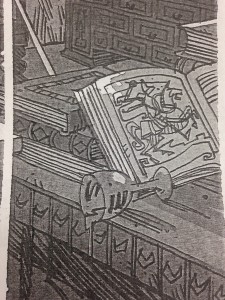 Students will inevitably describe Quixote  as a delusional fool.

4. Students then read the following portion of the text and react with a character sketch using adjectives and textual evidence.

At this point they came in sight of thirty forty windmills that there are on plain, and as soon as Don Quixote saw them he said to his squire, “Fortune is arranging matters for us better than we could have shaped our desires ourselves, for look there, friend Sancho Panza, where thirty or more monstrous giants present themselves, all of whom I mean to engage in battle and slay, and with whose spoils we shall begin to make our fortunes; for this is righteous warfare, and it is God’s good service to sweep so evil a breed from off the face of the earth.”

“Those thou seest there,” answered his master, “with the long arms, and some have them nearly two leagues long.”

“Look, your worship,” said Sancho; “what we see there are not giants but windmills, and what seem to be their arms are the sails that turned by the wind make the millstone go.”

“It is easy to see,” replied Don Quixote, “that thou art not used to this business of adventures; those are giants; and if thou art afraid, away with thee out of this and betake thyself to prayer while I engage them in fierce and unequal combat.”

So saying, he gave the spur to his steed Rocinante, heedless of the cries his squire Sancho sent after him, warning him that most certainly they were windmills and not giants he was going to attack. He, however, was so positive they were giants that he neither heard the cries of Sancho, nor perceived, near as he was, what they were, but made at them shouting, “Fly not, cowards and vile beings, for a single knight attacks you.”

A slight breeze at this moment sprang up, and the great sails began to move, seeing which Don Quixote exclaimed, “Though ye flourish more arms than the giant Briareus, ye have to reckon with me.”

So saying, and commending himself with all his heart to his lady Dulcinea, imploring her to support him in such a peril, with lance in rest and covered by his buckler, he charged at Rocinante’s fullest gallop and fell upon the first mill that stood in front of him; but as he drove his lance-point into the sail the wind whirled it round with such force that it shivered the lance to pieces, sweeping with it horse and rider, who went rolling over on the plain, in a sorry condition. Sancho hastened to his assistance as fast as his ass could go, and when he came up found him unable to move, with such a shock had Rocinante fallen with him.”

The students are expected to annotate – ask questions, make connections, underline important passages, etc.  The class then begins to share words that describe Quixote.  These words always paint Quixote as some sort of delusional fool.

5. The students then watch a short youtube video clip of this scene.  Again – they are asked to describe Quixote.

6. We then go through the remainder of the powerpoint and I do my best to give my interpretation of Quixote as a hero – that we could use someone like him in the world today.  Sometimes I convince the students, sometimes I do not – but it is all about providing textual evidence and analysis.

7. The students will read and annotate the Coldplay lyrics of Don Qiuxote BEFORE listening to the song.  We discus how music itself can change meaning and mood – we focus on the text first.  I then model my annotations – but I make it clear that everyone’s opinions matter -as long as the can be back up by text.  Nothing ruins a song or poem more for me than when a teacher tells me what it must mean.