OK – this is my first attempt at writing a review of a comic – a comics journalist, if you will.  Please forgive me if I don’t follow the traditional conventions as such – but I have been loving the political commentary going on in this comic, and just had to write about it.   I was absolutely floored by making a direct connection from history to comic book.  Maybe I’m crazy.  Maybe you don’t see it. But I want to open my Civil Rights lessons with this comic book and see if my students can make the same connections.  PLEASE – respond – let me know what you think.  Am I just blinded by my hero worship of Mr. Lewis?  Hit me up at @historycomics or historycomicsguy@gmail.com.

My own personal superhero is Congressman John Lewis – both in his role during the Civil Rights Movement and current leadership in Congress today.  I am teaching my 11th graders the graphic novel based on his life, March (this is a must read book) for the first time in the 2016-17 school-year. As such, I read the book based on his life, Walking with the Wind, and just finished it yesterday.  Since this eye-opening book was fresh in my mind, I could not help but make a direct connection to the Sam Wilson story that came out on 6/29/16.  I have never been one to tell students what a song or poem means – I always want them to make their own interpretations, but this is my view…

The white people being interviewed comment that “Captain America is supposed to represent ALL of us… He has a radical, highly partisan an frankly ANTI-AMERICAN agenda. It’s time we took a stand against the political correctness that now permeates the Avengers.”  – this is an obvious allusion to the still ongoing heated debate over having a “black” Captain America.  It also ties into having a black Spider-Man, female Thor, Gay Iceman, etc —  but especially with the idea of Captain America.  What does Captain America represent?  What should he (she?) look like?  This is a hot topic right now as American demographics and white males (like me) will become the minority and what that might mean for this country.

Page 4 – there is now a new police force – AmeriCops (based on AmeriCorps?) – the “most powerful private law enforcement body ever assembled.”  Is this talking about the militarization of American police forces, #BlackLivesMatter, Ferguson, etc?

Page 5 – “…accusations of profiling, harassment, and excessive force coming with increasing volume from leaders in many MINORITY communities” — ok, now the parallel is unavoidable in current American events.

So far, this is all about what is going on in the USA today — what is the connection to John Lewis and the Civil Rights movement?  Here we go… beginning on page 10 — African-American heroes (leaders) have met in a Philadelphia church to grieve the death of one of their own – James Rhodes (War Machine).  I am suggestion that Rhodes stands in for Martin Luther King, Jr – to some degree.  Rhodes was accepted by the white community and society  – he was incorporated into the superhero community, his race not an issue – a go-between the two communities.

Pages 11 and 12 – we see major African-American heroes seated together — I can see some arguing the lack of diversity on these two pages.  This is ignoring so many superhero organizations consisting of all Caucasian (and male) superhero groups – I have no issue here.  I begin to wonder who is represented from the Civil Rights movement at this point – especially, who is Stokely Carmichael (Kwame Toure)? Maybe he is not here yet…  At the time of MLK’s death, there were already cracks showing within the Civil Rights movement – perhaps each superhero could represent a different section of the movement – this would be a fascinating discussion in the classroom.

Page 16 – Sam Wilson is trying to figure out who will speak at the funeral — the other heroes are surprised as they all believe that Sam Wilson is the obvious choice.  I can see this as being John Lewis – always the reluctant hero and leader, but history pushed him to the forefront during so many events.

Page 18 – Sam is reminded that he is a Black Man AND Captain America. “Nobody ever notices history when it’s happening, but let me tell you — that is not A thing, that is THE thing.”  “A lot of kids in South Philly, they got to look up in the sky and see Jim (Rhodes) and say that could be them someday… but at least they still have you…and now you need to make sure that’s enough”  Although I see John Lewis on the same level (and more) as King, many Americans still have not been exposed to this man’s awesome legacy. Mr. Lewis has always seemed conflicted and unsure as to his role in the movement (it is large) and this helps me to make the connection between Captain American and him.  Also, this surprise of history being thrust on Sam Wilson, really speaks to Mr. Lewis’ idea of the “Spirit of History” as expressed often in Walking with the Wind.

Page 19 – scene of the church and so many people crowded outside for the funeral mass.  This is when the light bulb really went off for me.

Page 20 – the faces of the people in the church.  The image of Sam Wilson at the podium.  These are the images that were in my mind when reading Walking with the Wind. I very much see John Lewis as the stoic Sam Wilson giving the sermon.

Pages 21-22 – Rhodes is described as a soldier who was always focused on the mission – “do good, help others, make the world a safer, better place.”  “He didn’t want us focused on him — he wanted us focused on that… he did inspire us. I know he inspired me.  When it was my turn to fill some big shoes, I could call back to Rhodey’s (MLK) example and say, yeah, maybe I could do that, too… and he continues to inspire us”

Page 24 – “to never give up on the mission (of nonviolence) and to hold close to your friends, no matter what might be trying to tear you apart (differing factions within the Civil Rights movement), to show whoever comes next the way forward, to show them what being a hero really means.”

Page 25 – the burial at Arlington Cemetery – is this a connection to the burial of Bobby Kennedy? Lewis and SNCC did not go to pay homage to JFK when he was buried – but Lewis did pay homage to both men after the assassination of Bobby.

Page 26 – The AmeriCops are seen on the streets – several African-American youths are seen to be questioning the role of the police.  They seem to believe that something needs to be done to fight back – (enough of nonviolence)

Page 28 – A new character is introduced stating that “we’re” about to make a stand (African-Americans) – and that RAGE has their backs.  Does he represent Black Militants/Nationalism…?

Again – I don’t mean to make light of such a heavy topic — but this comic really made an impression on me as I prepare to teach my students about the Civil Rights movement – both historically and today.  What do you think?

I apologize for the poorly scanned images – the best I could do right now — the comic was just released on 6/29 – go and buy a copy at your local comic book store. 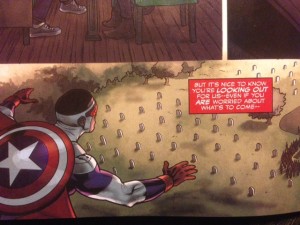 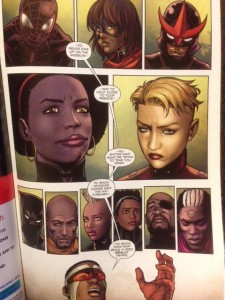 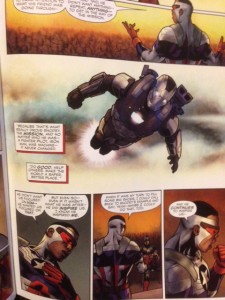 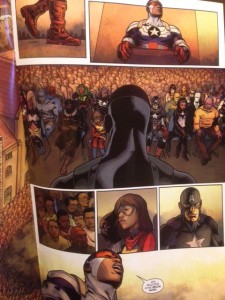 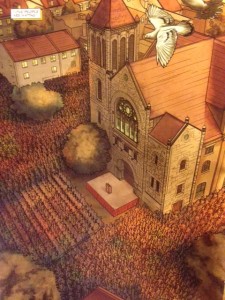 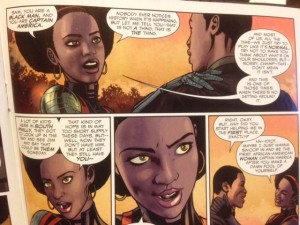 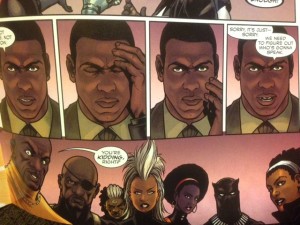 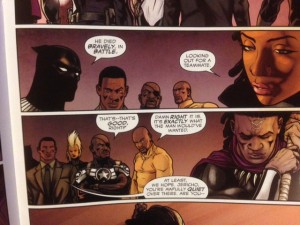 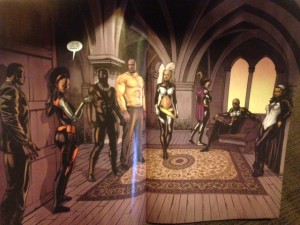 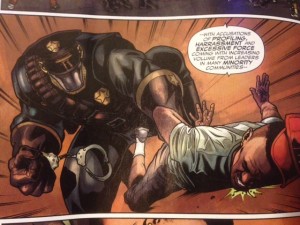 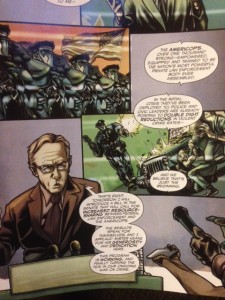 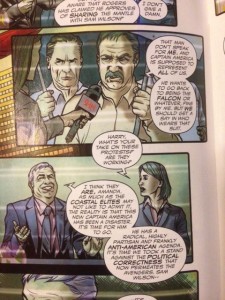 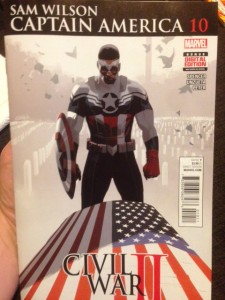 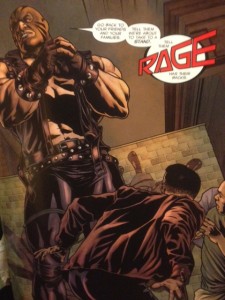 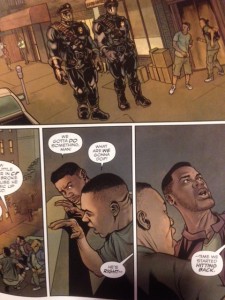 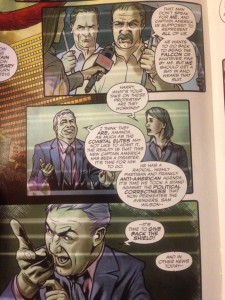