My students are currently researching and presenting revolutions across Latin America, think: Miguel Hidalgo, Jose Maria Morelos, Simon Bolivar, Jose de San Martin, Toussaint Louverture, Jean-Jacques Dessalines. We had just come off of the French Revolution/Napoleon and we began to make connections between the American Revolution, French Revolution, and Haitian Revolution. After they were done with their inspiring presentations, we then focused on making connections to revolutions today. I also wanted them to make their own connections and to understand why these revolutionary ideals have not yet been fully realized and how revolutions may happen in the near future. I won’t bore you with all the details, but will just give some samples of the questions we discussed as we will use revolutions as a thread in our Global History course. All questions were in a PowerPoint with images from around the world and we always pair/share in small groups before then sharing as a whole group.

After the students had paired/shared – we talked about the current state of the US economy and what can happen when enough are impacted to the point of pushing back – especially when they feel that those in the government are not listening to their needs (as in the other revolutions). As we talked about welfare, I asked what type of people/ethnicity are the majority of Americans on welfare. The classes became silent, but I explain that we need to talk about “tough topics” as we struggle to make progress. All who volunteered (students of multiple ethnicities) either said African-American or People of Color/non-white. We then did a quick search and quickly disproved this notion and then I asked – why do so many of us think this way? What is the role of media in pushing this biased view, etc.? Then we discussed the Estates in France and the impact of racial class system set up in the Americas. Of course, all agreed this was awful, etc. BUT – I then asked what our class system is in the US. Many didn’t think there is one – but some others volunteered that we have Upper, Middle, and Lower classes – all decided upon one’s wealth and their supposed value as humans – biases based on intelligence, work effort, etc. Of course, we talked about how one can work their way out of the class in which they find themselves and then focused on the “American Dream” – is it really attainable? Do we all begin at the same place? etc. etc. – this is another lesson for another blog post.

Then we analyzed photos from some other “revolutions” – these samples are from Ukraine. Before saying that these images were from Ukraine, the students stated thoughts about how they were from the protests/riots (we had a long discussion on the differences of these terms and how they can be used) in the US over the past few years. When I shared that these were from Ukraine, there was surprise. I think many believe that revolutions are in the past, and that what we are seeing in the US is “just” a white/Black issue. Of course, we also need to look at haves/have nots, etc. throughout history and not just focus on events in the US as we are making connections across time and place. 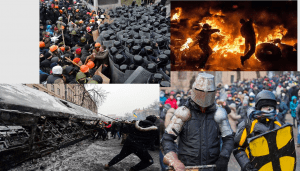 After students discussed, we talked about how this song initially came out when I was in high school – what does it mean that it can be updated? How much, if any, progress has been made? AND – the students who were really paying attention, noticed that Haiti, Toussaint, and Dessalines were mentioned in the lyrics. Once again – we made connections to the Haitian Revolution, connections to the US enslavement of human beings, and how Haiti was treated by “Western” nations that continues to have an impact today as such an economically impoverished country. 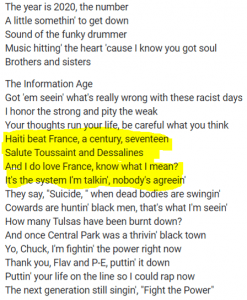 This then leads into an analysis of this political cartoon – 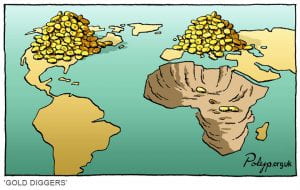 Students volunteered many fantastic answers (I will include samples in a later update). We then discussed a possible SEPTA (public transportation system for Phila, PA) strike that many happen soon. Of course, this would disrupt people going to work and students trying to get to school. What do you think they want? (#1 answer – more money). But what else? One of the “demands” from the union is for paid maternity leave. Why would they ask for this in a contract proposal? Doesn’t the US have something like this in place already? What about for paternal leave? This discussion will lead us into the upcoming unit on the Industrial Revolution and the changes labor was able to bring about through their own revolutions. We then looked at this map and I just let the students talk 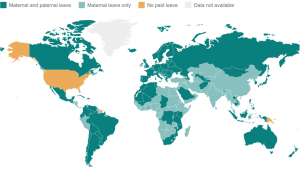 This turned into a powerful lesson that made many important connections throughout time and issues. Much of this may be lost in translation in a blog post, but I hope it may give you some idea of making history relevant. It also allows us to have open and honest conversations about “tough” topics, established classroom norms for respect and dialogue, and makes having these conversations more “normal” and easier to have throughout the year. I will share some of the student responses in an update to this blog as soon as I have the chance. Students are also begin to email me their own songs that inspire them to stand up for what they believe is right and I’ll put together a list of those as well.