I watched an amazing Ted Talk today that inspired me to update this blog – https://www.ted.com/talks/chimamanda_adichie_the_danger_of_a_single_story?language=en#t-813190

This woman brought together so many of my thoughts, fears, and hopes as an educator, father, concerned citizen, and social studies teacher.  I apologize in advance for my rough thoughts – I will polish this all up later – but I am taking full advantage of when my wife has been kind enough to put my three young children to bed as she saw the fire light in my eyes.  I have AP Econ work to be doing – but this has taken precedence.

My thoughts while watching this video, and my initial nerd comic thought: 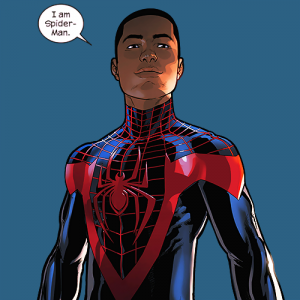 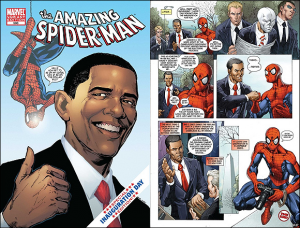 Comics are such an insight into society and should be used as artifacts – and I am excited at all of the changes that have been happening in the past few years.  I am proud to display my Spiderman comic with Obama on the cover – the fact that he is a Spiderman fan makes it all the better.  I have comics displayed all over my room and have managed to reach many “unreachable” students on the once fringe of society thought this medium – my comic book classroom is always filled to capacity to those wishing to discuss comics and the history that is shown through them.  Anyway – the first image of “I am Spiderman” connects me to a powerful moment as an educator.  I had a particular economically poor African-American male student who was full of the stereotypical tough guy, screw school attitude.  I was unable to connect with him until I put up my Miles Morales Spiderman comic.  He shyly came to me one day after class and asked if he could have a look at the comic.  Not only did I let him look at it (trying to contain my nervousness at him crinkling the corners – lol) but I began to talk to him about it.  When I went to the comic book store (admittedly every Wednesday – my poor wife) during the school year, I bought this student a new copy of the comic.  He was absolutely astonished that Spiderman could look like him – that he could be a superhero.  This was a kid who was never into comics but now was hooked.   A student who would never read (he was too cool – also that he was too ashamed to admit that we was well below reading level), but who would now stay after class to discuss the politics of the comics and its social ramifications.  He loved that I took a personal interest in him – and that, as a white male – that we were able to connect on a new shared interest (we later discussed Hip Hop and its reflections of contemporary society).  When I gave him a coveted edition of the Obama comic, he was absolutely astounded that I would do this for him.  The connection was obvious – if Spiderman could look like him, if the president could look like him – what could he do?  I count myself lucky to have had this student as a freshman – I had the opportunity to help shape him and to give him hope – we still interact in the hallway — he has been known to cause problems for some others when around his friends.  But when he sees me, it is always – Hi, Mr. Smyth – how you doing?  The head nod he gives me says everything.  The handshake and eye contact are deep and heartfelt – I have such hopes for him.  I am proud of him and check in with him often.  This speaks volumes to the Ted Talk – that we want to see ourselves reflected in classrooms, movies, books, etc.

OK – now to my thoughts as I watch the Ted Talk – I promise that I will polish this up later. 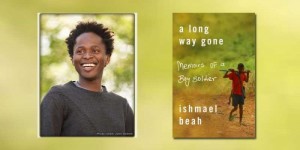 Ishmael Bae – this is an absolute must-read that I read aloud to my students every year.  I heard him speak at Villanova University and I was also lucky enough to talk to him following his speech.  I cannot imagine what this man went thought – but his story certainly personalizes history for my students who too often doze in the traditional textbook middle of the road rhetoric.  I connected with him as we wrote and spokje about listening to American hip-hop while growing up in the horrors that he experienced – that someone who looked like him could have so much power.  We both reminisced on the origins of hip-hop as a political movement based on change – this movement has now largely become more of who has the bigger rims and who can treat women the worst.  I often use Public Enemy and Chuck D as examples of the movements of the 80s and connect Ferguson and slavery — how much has changed and how much further do we need to travel as a society to make Jefferson’s words true – “All men are created equal…”  We listen to several Public Enemy songs in class and while reading parts of Kyle Baker’s phenomenal graphic novel on Nat Turner (see lesson here – http://historycomics.edublogs.org/2014/11/10/nat-turner-slavery-and-imperialism-through-comics-and-hip-hop/)

When I taught 10th grade Global History (I am hopefully going back to this next year) – I used to have my students write pen pal letters to students in Africa.  I always laughed when the letters came in for the first time – my wealthy students were often taken aback at the pictures that were sent to them – kids their age dressed in jeans and t-shirts.  Admittedly, my students were often expecting a picture of a kid with a spear and grass skirt.  This led us into great conversations on how Africa is NOT a country and that the people on the continent are as advanced, if not more so, than we are here.

Africa is not a country – all blacks are not African – my Jamaican students has taken exception at being called African-Americans.  They are not from Africa and identify with being call black.  This then leads us into a discussion on how there are black people who live in the caucus mountains – thus making them Caucasian!  I have also had white students (Afrikaans) from South-Africa – they could be considered African-American!  We have these discussions to make the class a save environment and to help the students to not get caught up in labels.

Gold Digger – THOSE people – only using current events – not history.   When teaching about the Haitian War of Independence, I use the 2010 earthquake and response as a vehicle to discuss contemporary American views of the world.  Americans are great at offering aid to those who need it – but we are often short-sighted in terms of why “those people” are this way – we need to understand the history of why certain areas in the world are in their situation – often through American or European Imperialism.  Central Africans are no less smart or civilized than we are here in the United States. We need to get past this “one story” 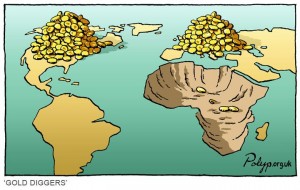 Black = less than – always been slavery – difference in African slavery in modern era is that it was because they were black – less than – social Darwinism – science run amok.

Holocaust – learned engineers.   This is why I teach.  Chills down my spine everytime. 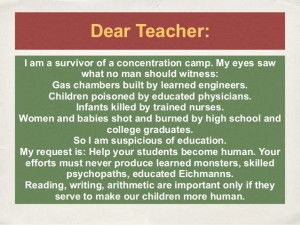 What is it to be black/African? I was a whigger. Is rap only a black thing? Country music a white thing?

Schema – folder – muslims = terrorist.  As educators, we know that people are set up to organize and categorize – schema.  This is what leads to stereotypes.  This doesn’t make us racist- just something of which to be made aware.

History was often told in the eye of the powerful – those without written languages often left out – leopold book is the best example.  A must read of how Western Civ was built on the backs of others in the name of progress and science. 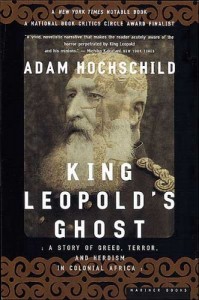 Whitewashing of history in Africa and the light skinned pharoahs