After a long day of presenting and attending panels at New York Comic Con, my wife met me at the hotel after taking the train up from Philly.  We were both tired – me from a day of “work” and she from a day of teaching.  I told her how impressed I was to meet so many people who were willing to give up their free time to present and learn about using comics in education (more on this later.) We were both hungry, but she knew how much I was looking forward to attending one last panel – Afropunks & Blerds: The Black Nerd Renaissance.  The panel did not even begin until 7:45 (after the con floor was closed) , but I really wanted to see Dr. Sheena Howard speak in person.  Her amazing book, Black Comics: Politics of Race and Representation (read my detailed review here – Black Comics Review)  had such an amazing impact on me, that I had looked forward to this panel all day.  Dr. Howard was kind enough to help a student of mine write a research paper and even sent her a signed copy of her book.  Also, I have found such powerful connections with students through comics – especially Miles Morales and Sam Wilson. (read my PBS article here – PBS Article).  I knew that comics were not just for white guys and so wanted to hear more about this topic as it is near and dear to my heart.  So, my wife and I grabbed a hot dog and walked back to the Javits Center.  We arrived a bit early, and I am glad we did – a line quickly formed – people who were also exhausted after a long day, but had hung around just for this panel.  I quickly noticed that we were in the minority – but there were a few other white folks with us.  That being said, in a sense, we were all together in our nerdiness and unique outfits.

When we went in, the room quickly filled up and I was thrilled to see the full panel.  I was looking at one guy at the end and when he was introduced, my mind was blown!  It was Corey Glover – the lead singer for Living Colour!  Then, a few people over, sat Vernon Reid – the guitarist for the same!  I often use the song “Cult of Personality” in my classroom when teaching about dictatorships, social movements, etc — I loved the group growing up and saw them open for the Rolling Stones in 1989 – my first concert.  I remember what a big deal it was having an African-American rock N roll band – and they are awesome.  Wow – but, I thought – why were they on a panel on Black Nerds – were they comics fans?  I was about to be schooled on just what being a Blerd and Afro-Futurist meant.

The idea here is that Blerds are African-Americans who don’t fit into, and who actively fight, the definition of being “Black.”  The idea here is that, to be Black, one needs to listen to hip-hop (only), not be educated, wear baggy pants, etc, etc, – all of the negative stereotypes that our society so unfairly places onto African-Americans.  (Once upon a time, I was known as a “whigger” because I listened to hip-hop and wore my pants baggy.  I never understood how the music I connected with was termed “black”.  I also love Blues music…) As the panel discussed many topics, it became clear that they were all there to share that they had other interests and often faced criticism from within their own “community” and from without.  Some were comic book fans, rock n roll fans and stars, opera fans, gay, and one shared his struggle with depression and anxiety.  Not everyone on the panel agreed on everything, but this only added to the importance of the panel and their discussions.  I was impressed on a human level at their honesty, dedication, and humanity.  These were people who were sharing personal stories and opening their souls – their words resonated with those in the hall and I was in awe of what was happening.  This humanity went right to the very end when David Walker connected with a young audience member who asked a question on the mic and related her own struggles with depression.  In front of the entire room, this man spoke to her – as if it was only the two of them – and opened his heart and humanity to her.  It wasn’t a black thing.  It wasn’t a nerd thing.  It was a human thing.

That’s it – that’s what I love so much about the nerd community in general.  When at SDCC, my own daughter remarked how anyone could be a superhero, that girls could be superheroes, and boys could be princesses – that was one of my proudest moments as a parent.  My wife and I reinforce that we simply want our children to be happy and to treat others well – no restrictions given. I had struggled with my own identity – a white kid who loved N.W.A. and Public Enemy, but also the Cure and comic books – I often felt the need to code switch between groups.  This is in no way to say that I know what it is to be a Blerd, or even African-American, it’s just that what the panelists were saying connected with me.  Here, in the East Coast version of the nerd Superbowl, as a minority white male, I felt like I had found a home of sorts.

As a teacher, I metaphorically live and die through the successes and failures of my students.  I am not one who believes that “we can’t save everyone” or that throwing the one starfish back into the ocean is something of which to be proud.  I carry the failures of my students as personal failures – I love my students and call them my kids, just as I do my own biological children.  I teach all levels of students – from ELL and academic, to honors, gifted, and Advanced Placement – I love the experience and challenges of all students.  One of my biggest upsets involved three African-American female students who were in my one honors course.  They were amazing – I think, in part, they found their confidence in being in the same class together.  Towards the end of the year, I took them aside and told them that I was recommending all three of them for the Advanced Placement course as SOPHOMORES.  I also taught the course, and I looked forward to being lucky enough to teach them a second year.  To my surprise, they told me that they would not take the course.  I could see the nervousness in their eyes as they did not want to disappoint me.  When I asked why, the related how painful it was for them just to walk into my honors class – that their friends made fun of them for acting white.  They knew, that should they take an AP course, that the ridicule would just be that much worse.  I was flabbergasted.  I did not want to pressure them, but I did explain to them that my door was open and that I would speak with their parents.  It wound up that only one of the three took the AP course and she was the only African-American in that course in that school-year.  She found much success, but I also knew that she had suffered loss as a teen and with her friends.  this is what the panel was speaking about – these three were Blerds before the term was even coined.

I was able to reach an African-American male a few semesters back through comics. He was a student of few words – he had the tough guy act down pat.  He wanted to let me know that he didn’t care about school and that he would only do the minimum required, no matter how much I encouraged him.  A brick wall was put up between he and I, until I brought in a comic.  Miles Morales had just been introduced as a superhero – the Black Spider-Man.  His eyes got wide and said – “wait – Spider-Man is Black?”  I could almost see the wall begin to crumble.  For this student, it wasn’t a Black president that made the difference, it was a highly visible superhero who looked like him.  Our relationship changed as I brought him in comics and he stated after class to chat.  We didn’t become best friends and he didn’t turn into a straight A student, but we had connected.  He work ethic improved and he wanted to be in class.  I wasn’t some white dude – I was a fellow nerd.

We are all outsiders to some extent – some more than others.  I thank the members of this panel and I hope these conversations continue.  I hope to see the panel earlier in the day and with a crowd of even more white faces.  I love the diversity in comics – I only hope that the movies and toys catch up soon.  I wish my words could better convey the power of this panel – I can only hope someone caught it on video and that it can be shared with you all.  If you want a starting point on African-Americans in comics, I implore you to buy Dr. Howard’s book – trust me.

We all laughed as a room when references were made to Star Trek and the idea of Futurism – we all had something in common – we are all nerds.  I wish I had taken more notes during the panel presentation, but I was just so enmeshed in what was being said and the collected intelligence and humanity that was taking over the room.

David F. Walker, Corey Glover, Jamie Broadnax, Ytasha Womack, John Jennings, Vernon Reid, and The Blerdgurl herself and an awesome moderator.  Can you come to Philly Wizardworld?  IF so, I am there and I will encourage my students to come – of all backgrounds. 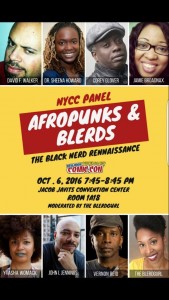