5/10/18 – Today was awesome! Members from two of our high school clubs – Comic Book Club and CASA (Celebrating All Students’ Achievements) – came together for a Skype session with author and artist Jerry Craft. I have loved reading all of the books Jerry has written and illustrated and was immensely pleased when he agreed to spend some time with our clubs. I was prepared to spend about 15 minutes or so having a Q and A session from the kids, but we wound up spending an hour sharing stories, laughing, and learning so much. Jerry is such an awesome human being who cares deeply about his work and sharing it with young people. He immediately made my nervous students feel comfortable as he teased them, called them out by name, and gave them invaluable insight into the process of writing and illustrating books. Holding the attention of a roomful of teens is difficult at times, but they were completely focused on the discussion, even though some of them were stressing about the AP US test being given the very next day. It was great to see the kids relax for a bit as Jerry made them feel valued.

Jerry shared with us, under pain of execution, pages of his upcoming book, New Kid, published by HarperCollins, that will be published in February 2019. My students let out audible gasps as they were told that they were among the first to get a peek into this upcoming book! (I was giddy myself!) This really left an impression on the kids – that Jerry would not only trust them with a sneak peek, but that he was so excited himself to share what he was doing. Several of the students remarked on this repeated reaction from Jerry – that he was so passionate about his work. This then fired up the students as well. Jerry not only shared much of his book with us, but he also walked us all through the process of writing and illustrating. Some of my students want to become authors, illustrators, and journalists and the knowledge that Jerry dropped was invaluable. He has been working on the illustrations for 13 months at this point and still has months to go before completion. Jerry shared that he mostly works seven days a week and up to 15 hours each day on this project. He shared with us feedback from his editors and countless small “mistakes” or oversights that needed to be fixed on what he had already completed. He also shared the process of just choosing the right cover for the new book and how many changes were made – we love the one that was finally settled on. He gave huge compliments to his editing team at HarperCollins and explained how much they have helped him in the process. Jerry did not complain about any of this process – we could easily tell that he loves what he is doing.

Passion – this is a word that Jerry used often in the conversation. Find what you love to do in this world – there are lots of cool jobs out there. Success will find you. But do what you are passionate about. Jerry then shared that this is what I do as a teacher – that I am obviously passionate about what I do and integrating engaging resources in the classroom – not just opening the textbook. I smiled when my students laughed at this and all nodded their heads in agreement. I preach this all the time – it took me awhile to fully realize this concept, but I love what I do and incorporating my passion in the classroom. Jerry told the kids to find their superpower as people will benefit from their passion. However, with passion comes hurdles as well – Jerry shared his rejection letters and the long road it took to find his success. This is an invaluable lesson in today’s instant gratification and “reality” contest shows were people seem to become instant successes.

Jerry talked to the kids about his background and how pop culture has changed over the years, from Blaxploitatation and Good Times and What’s Happening to Black Panther and Creed. He also shared how this was an influence on his creation of the award winning Mama’s Boyz comic and books. He was initially rejected because he purposely did not want to fall into the traditional Black stereotypes of basketball and gangs. Many publishers were looking for traditional books on MLK, Jr, Frederick Douglas, civil rights, and slavery. Jerry wanted to write authentic stories of his life without falling victim to these overdone topics. He knew that his own kids were interested in Harry Potter, Percy Jackson, and Diary of a Wimpy Kid. This reminded me of my experience in a NYCC panel on Blerds – http://historycomics.edublogs.org/2016/10/12/blerds-the-beauty-of-nerdism/ This is when he decided to self-publish – even going to the library to read a book about self-publishing to do so! There is no violence or gangs in his stories, but they are also hard-hitting and meaningful. He tackles topics on bullying, nutrition, respecting elders, music, and more.

We were ready to say our good-byes – all of the kids were clapping for Jerry. But he wouldn’t let us go! Here I was afraid that we were taking up so much of his time, but Jerry still had more to share with us. He began talking about a possible sequel to his upcoming book – showing us an actual story arc that would make English teachers everywhere excited! He told us about how he is always observing and watching people so that he can be authentic in his drawings. He is able to look at the most ordinary and repetitive interactions in life and see so much beauty in them. This was simply amazing.

Jerry’s book, New Kid, comes out in February 2019. I was able to get a peek into it and can’t wait to read the entire book! There was so much honesty, emotion, heart, and laughter in what I was able to see. There was one part in the lunchroom… well, I promised I wouldn’t give away details. But trust me, it hit me in the feels! In the meantime, check out Jerry’s existing books which I cannot recommend enough at http://www.jerrycraft.net/

Thank you, Jerry. The kids kept talking about you for another 30 minutes after we ended the Skype session. You have fired up their imaginations and have filled them with hope, and a dose of realism, for their future. There is no greater gift an individual could give to my students. 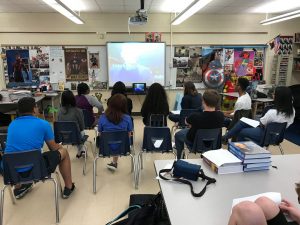 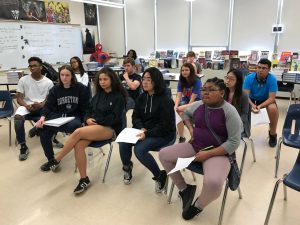 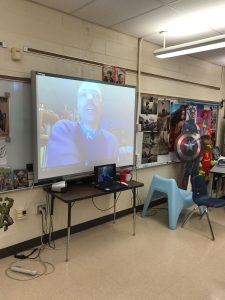