I am lucky enough to have gotten to know Laurie Halse Anderson over the years, both in person and by reading her emotionally brave and honest writings. My wife and I wrote the teacher’s guide for the powerhouse graphic novel adaptation of Speak (https://images.macmillan.com/folio-assets/teachers-guides/9780374300289TG.pdf), even using the book to teach our own 7th grade daughter about the importance of finding her own voice and standing up for herself. I also find the Seeds of America Trilogy (Chains, Forge, Ashes) to be a powerful read – if you are teaching US history – it really is a must have in the classroom! Another of Laurie’s many books that stuck out to me was The Impossible Knife of Memory, about a young girl having to navigate the perils of her alcoholic father as he struggled with PTSD since fighting in Iraq. Little did I know that this story was actually about events in Laurie’s life and her own father struggling with similar demons after WWII. This year, I looked forward to reading Laurie’s newest book, Shout, as I knew that it would help so many victims find their voices and empower our youth. However, the first two entries in the book, both poems, took me completely by surprise. These two poems center on Laurie’s father and his experiences in WWII and helping to liberate Dachau. Needless to say, this has a long-lasting impact on him and Laurie’s family. As soon as I read these poems, I knew that I needed to integrate them into my WWII lesson as it helps to humanize such an overwhelming era. It also happens to be National Poetry Month and I knew that we could also discuss current issues through the poems as well. This is the power of approaching social studies courses through a humanities lens.

My lesson consisted of having students annotate the two poems, “in the name of love” and “stained glass curtain’s in my mother’s mouth” – this is such a crucial skill for all classroom, not just Language Arts. Even as a social studies teacher, I expect students to interact with text – asking questions, making connections, reacting, etc. – and I model this with them as I share my own annotations. After they completed the annotations, they then are asked to write a brief overall reaction and then ask two specific questions of the author. The students then pair/share what they have annotated and their questions as they sit in tables of four students. This allows me to sit with each group and discuss with them and, this is so important, to LISTEN to them and not run the conversation as the teacher. I am so often astounded by the deep connections students are able to make between history and text when I just get out of the way.

We then talked as an entire class about the connections that we made and began to conduct some research on the topics that came up. The most common topic was that of PTSD and the impact on soldiers and their families. The laptops were then flipped open and we began to dig deeper about suicides from today’s veterans and came across some disturbing figures. We made sure that our news sources were credible, even using official US Military findings, before discussing further. Finding out statistics such as – 20 veterans committed suicide each day in 2016, 321 ACTIVE duty military personnel committed suicide in 2018, half of all military personnel know a vet who has committed suicide, and much more. These numbers would mean much less if not for the human connection the students were able to make through Laurie’s poems. I then discussed how my grandfather never opened up about his experiences in WWII and that family members refuse to discuss experiences in Vietnam. This, of course, leads into the discussion of the changing definition of what it means to be a “man” today and that we all need to access our feelings, fears, and to seek help when needed. We are now discussing what we can do to help. More on this later.

Too often, the textbook will just end with WWII is ended, now onto the Cold War. Text can often be dry and dehumanizing – it is through personal literature, such as these poems form Laurie, that help us find the connected humanity in all of these events. The wars are not over when the fighting is complete and the witnessed events will continue to have impacts. That Laurie was brave enough to share what happened with her father, his decline into alcoholism, even hitting her mother, will help so many. Her book, The Impossible Knife of Memory, though fictional and set in more modern times, it is a haunting view into Laurie’s own life. This point is not to be overlooked when we discuss literature in the classroom, that the author’s life and experiences need to be examined and taken into account. We will now be able to better discuss the events of wars throughout time and their continuing impacts.

What makes this lesson all the more powerful, is that my students are 10th graders and many were lucky enough to have seen Laurie speak when she visited our Middle School and chatted with them as an author in my Language Arts wife’s classroom.

Some questions and connections that have come up from students:

Emotion is essential for being human

“The image of my father hitting my mother picassoed in front of me” – this is like the painting of Guernica from the Spanish Civil War – I can really imagine this situation in my mind.

“Rearranging the truth on the floor” – turning point in the author’s life.

Allusion to fairy tales which are usually seen as romantic/lovely, very out of place here.

These are typical signs of abuse

Why didn’t the dentist or her parents try to help?

“I think that this poem really demonstrates how difficult it is to understand the experiences of someone else’s life. Simply by looking at him, it would be impossible to know all of these hardships that Laurie Halse Anderson’s father endured. Even after reading about it, it is difficult to comprehend exactly how he must have felt, and I think that that is one of the main messages of this poem”

“Did the father force the family to lie and cover up abuse or did they decide to not share?”

“How does Anderson feel about her father today?”

“The War was more than just what happened on the battlefield”

“When the mother kept on saying that he “had to” hit her, she was lying to both her daughter and to herself. Deep down, she knew that what he did was wrong, but it was easier for her to take if she told herself she deserved it. Her weakness made me upset because if shes spoke out, she wouldn’t have to feel trapped”

“PTSD… when she said that the war was over, but not really, it seems to allude to the battle within himself”

“What would have happened if his ‘mental crate’ overfilled?”

“The war after the war”

“The war caused as much trauma to Laurie and her mother as it did to her Dad.”

“Why did her mom think she deserved it?”

“I feel that her father’s actions are irredeemable, but they are also understandable”

“It angers me that some women or anybody who’s experienced abuse think it’s their fault that the abuser got mad and try to fix themselves to the abusers satisfaction. The Dad is obviously still trying to overcome his experience from the war, but that gives him no right to hit her. Reminds me of the Women’s march I went to. I wonder how this impacted Laurie’s view of men throughout her life?”

“This reminds me of learning about Freud and repressed memories…”

“This was well done as I felt like I was a lost soldier. I like how she emphasized his age (18) because I am not that far away from that age, scary to think he was at war as a teenager.”

“When/how did your father finally tell you the story of his experiences?”

“It is terrifying to see the evil of mankind”

How can we help those with PTSD?

AND THEN – we were able to live tweet with Laurie for a bit – she is awesome! 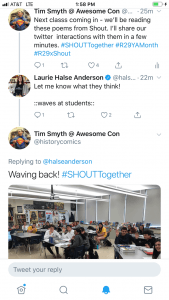 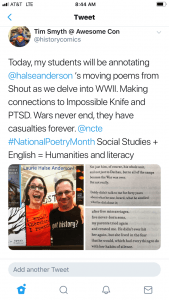