On 7/21/2019, Marvel announced, at San Diego Comic Con, that a new Thor movie would be released in 2021, starring Natalie Portman as Jane Foster, Thor. Not only would there be a female Thor, but Valkyrie, as played by Tessa Thompson, would also be the first LGBTQ+ character in the Marvel cinematic universe. At the end of Thor: Ragnarok, Valkyrie was given the mantle of kingship and, as  Thompson said at SDCC,  Valkyrie would be “looking for her Queen.” This new movie, Thor: Love and Thunder!, will be released in November 2021. The director is the inspired Taika Waititi. There were many other exciting announcements, but I am going to focus on the impact of Jane Foster as Thor, as she is one of my all-time favorite heroes. She is also the favorite of my youngest daughter, who routinely dresses up as Thor for Halloween and comic cons. When this new movie was announced, I could not wait for her to wake up the next morning as to share the news with her and my other two children. 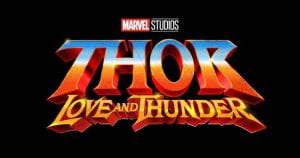 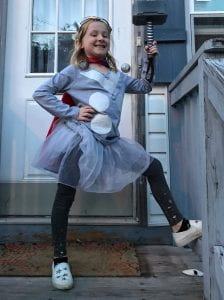 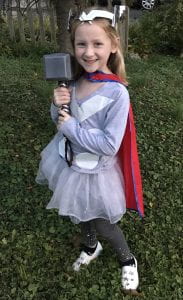 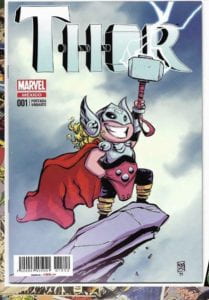 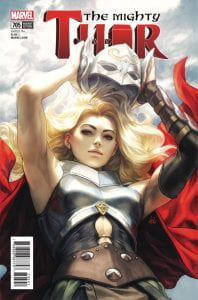 I travel the country giving workshops to educators on how, and why, to integrate comics in the classroom. I spend a lot of time discussing the fantastic increase of representation in comics and how important it is for students to see themselves in literature, as characters, authors, artists, etc. As a mid 40’s straight, white, CIS male, I know now how privileged I was growing up in that almost all of the positive heroes I saw in comics, movies, TV, etc. looked like me. So many adults haven’t read a comic since they were kids and haven’t been aware of how this has changed in modern comics. The movies simply had not caught up to the comics, and many only knew what was being done in the movies. However, this too is changing.

I was lucky enough to be asked by PBS to write two articles about how/why I use comics in my classroom, and this topic is discussed in both –

I was also interviewed for the local newspaper on this topic – even making the top fold on the front page! The text of the interview is here – http://www.montgomerynews.com/amblergazette/news/comics-in-the-classroom-how-one-wissahickon-teacher-uses-comic/article_aceed392-c658-5dfb-bec2-e339fecacd56.html 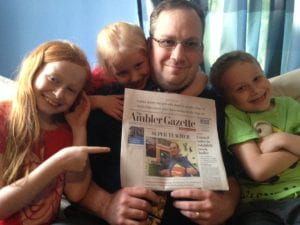 My family attends many comic cons, and my son said something to me at San Diego Comic Con that just struck me – he said – “Dad, look, anyone can be a hero (as he looked around at the many cosplayers). Boys can be princesses. Girls can be Captain America. Anyone can be anything they want.” If nothing else, this shared sentiment by my children has made all of these trips worth it. My kids have grown up in a house of books, including comics. To them, having a gay Iceman, black Captain America, Queer and Latina America with two moms, “overweight” Faith, bi-racial Spider-Man, Latina Green Lantern who suffers from anxiety, a 16 year-old Muslim, Pakistani American girl from Jersey City, etc. is all just the norm for them. And this is what gives me such hope for the future of our global society – that this will all become the norm.

This hasn’t always been without complaint or outrage from some. I am a member of many online comics groups and even created a Facebook group for Comics Teachers. I see people comment both in support and against what some see as a political agenda or forced political correctness. That these changes in comics are ruining their childhood and will destroy the comics industry. The argument is just not there for me – the traditional Spider-Man, Thor, Green Lantern, Captain America, are still there. I have even gotten into a debate with a teacher who thought that Thor could not possibly be a woman as it flies in the face of historical Norse Mythology. Seriously? There are many Thors throughout the comics canon – including THROG – a frog Thor. This is all acceptable – but a female? Nope, that’s just going too far!  There really is no way to argue with these folks and I honestly don’t waste my time. I KNOW the power of this representation with my own kids and with my students. These people who are complaining are not the ones buying a lot of new comics today and they will fade over time. 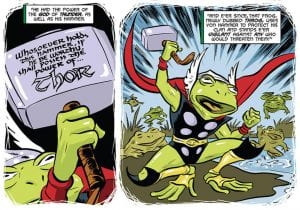 I’ve even been seeing that Natalie Portman can’t possibly be Thor because she is took skinny, not strong enough. Ha! This reveals a true lack of understanding of what makes Jason Aaron’s Jane Foster Thor so truly powerful and inspiring. Jane Foster is not just battling intergalactic monsters, she is also battling an internal monster – breast cancer. Every time she picks up the hammer to become Thor, the chemo therapy she is receiving stops working. When she fights to save us, she chooses to do this, knowing that it will accelerate her cancer. The letters to the editor for this run have been full of thanks from women seeing the bravery in themselves and their female relatives also fighting this cancer.

When my daughter showed her Thor costume at school (third grade), many boys laughed and told her that Thor could not be a girl, that he was a man. (Notice the subtle GIRL vs. MAN, here?). Her response was to tell the boys that they needed to read the comics. I gave her some comics to take in and show them. She also corrected these boys when they called Jane Foster the “female Thor.” – “She’s not FEMALE Thor, she’s THOR”. Love it! She and her sister also corrected me at dinner one night when I was talking about PRINCESS Leia. They were quick to tell me that she is GENERAL Leia. 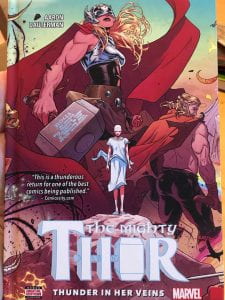 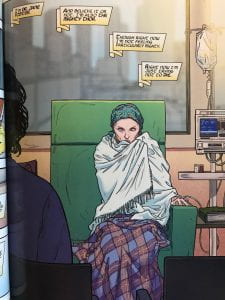 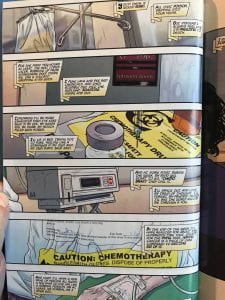 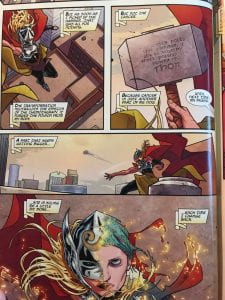 Today, I celebrate the news of the new Thor movie by wearing my shirt – 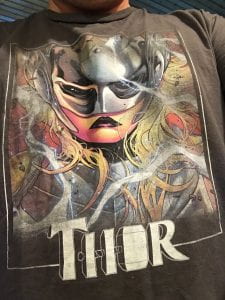 And this brings up another point about representation and our societal prison cells of gender norms. I often see girls wearing male hero paraphernalia, t-shirts, backpacks, even full on costumes. Many see this as cute, as normal. But when the opposite happens – when a male wears that of a female hero, he is seen as lesser than, as being “unmanly” (whatever that is). I proudly wear items to my presentations and in my classroom that represent female heroes – Wonder Woman tie, Bat Woman suspenders, Ms. Marvel shirts, and more. I have often been stopped by women telling me how great it is what I wear these items – but this shouldn’t be such a big deal. I’ve not seen someone make a big deal when a female wears a Captain America t-shirt.

When I told my kids that I had exciting Marvel movie news, my son excitedly asked me if they were making a Ms. Marvel movie. When I said no, he was disappointed. I love that this Muslim girl is his hero.

I have many pictures in my classroom with my family and our favorite comics authors/artists we have been blessed enough to meet throughout the year. I had an exchange student from Kuwait in my class, and she stayed after class to talk to me about the picture of us with G. Willow Wilson (author of Ms. Marvel and many other great books). She told me that it was the first time she felt accepted at our school and wanted to talk more. This showcases the importance of our students seeing themselves in our classrooms. 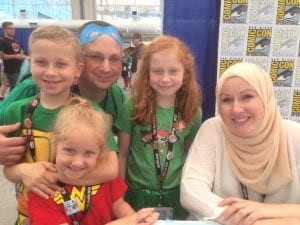 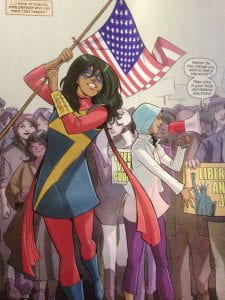 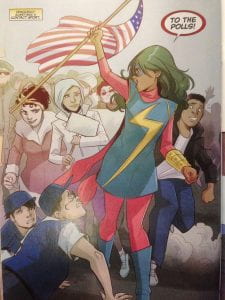 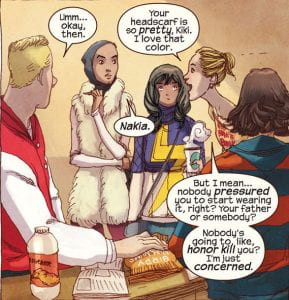 I also connected with a shy African American student who came to talk to me about Miles Morales. He was more impressed that Spider-Man looked like him than did the US President at the time! 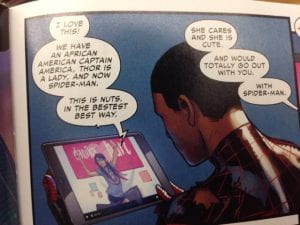 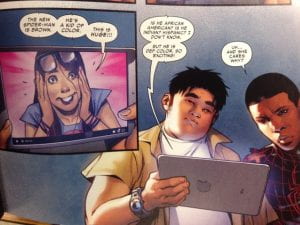 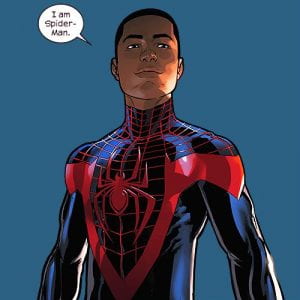 Is there still work to be done? Absolutely. While Loki is gender fluid, we need more characters who are transgender, nonbinary, questioning, and more. We need to increase the representation in the front offices of comics companies. But things are so much better than when I was growing up. When I was in school, no one was gay (or so I thought). I had never heard of the word transgender. We are getting better and we need to keep increasing the visualization of all types of heroes. One great example is a conversation I had with my kids at Denver Pop Culture Con. One of the favorite series in our house if Phoebe and Her Unicorn, by Dana Simpson. I was lucky enough to present with her and other creators during a panel on fairy tales in comics. (I was the diversity on the panel – certainly a first for this white guy!). My youngest, who is a HUGE fan of Dana, had a question. Yep – Dana is transgender. My daughter asked what this meant and I explained to my 2nd, 4th, and 6th grade kids in about one minute what this meant. It was not a complicated conversation. It was not a topic only for adults. My kids basically said “ok” and that it was great that she was happy. I really love all of her books – it’s a modern take on Calvin and Hobbes  – witty, funny, heart-felt, and imaginative. 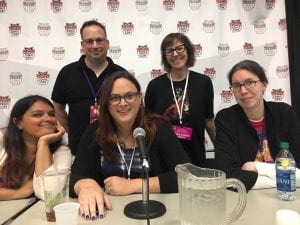 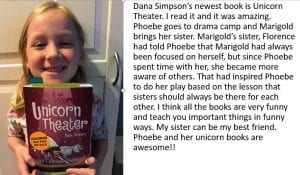 Also pictured here are Tracy Edmunds – a fantastically inspiring educator on all things comics in education. Check out her website – tracyedmunds.com

Also – Nidhi Chanani – author of Pashmina and amazing artist. Pashmina is a wonderful book about Indian culture and a favorite in our house.

To get copies of The Mighty Thor run written by Jason Aaron and drawn by Russell Dauterman, you might still be able to find single issues at your local comics shop – I have every one. As an educator/librarian, a cheaper and longer lasting option, is to order the collected series (there are five hard bound volumes). The ISBN for the first volume is 9780785195221. This is a great way to teach about the impact of current events and pop culture as artifacts. I have a lot more to say on the subject of representation in comics, but I will stop now and thank you for taking the time to read this much.

Thank you to G. Willow Wilson, Jason Aaron, Brian Michael Bendis, Sara Pichelli, and so many other visionary authors for their willingness to give us the heroes we need and deserve. (You need to watch G. Willow Wilson’s Ted Talk on the fears she had creating Ms. Marvel, I show it to my students every year – https://youtu.be/piWo4200G0U) 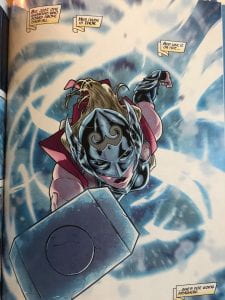 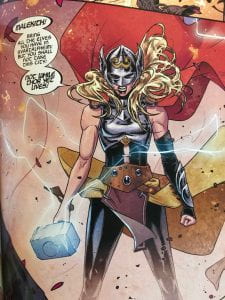 I also wrote another blog post on my learning about the term Blerd and the awesome @TheBlerdGirl http://historycomics.edublogs.org/2016/10/12/blerds-the-beauty-of-nerdism/