I. Background – through two lessons of reading, researching, and teacher Powerpoint, students garnered a basic background of Columbus and the Age of Exploration and the impact on Native Americans and Africans.

2. Students then read the author’s two page introduction to the graphic novel.  We discussed the idea of – one man’s hero is another’s villain (IRA, American Colonists VS English, bin Laden, etc).  Was Turner a hero?  Why would textbooks steer clear of this topic?  We also discussed the importance of education and why slaves were forbidden to read and write.  We also discussed illiteracy VS alliteracy and what power critical reading brings to civilization.

3. Students then read the first chapter of the graphic novel and filled in the Nat Turner summary worksheet.

4. Homework – draw what you think happens next (students could either draw it or use an online comic generator like Chogger.com. )

1. Students will come in and pair/share their Nat Turner summary worksheet answers and share their drawings.  There are also asked to make direct connections to the Jewish Holocaust.  We will then pair/share and I will walk the students through the first chapter, page by page.  As I do this, I will model the skill of critical analysis using textual evidence (I call this “the so what?).  Students are often surprised that there are Africans capturing other Africans – most students completely missed this when they read on their own.  We then stop the lesson to ask why would Africans enslave other Africans.

2.  Students will then listen to the Nat Turner song by Reef the Lost Cauze as they read the song lyrics.

3. Students will then watch a short 4 minute documentary on Nat Turner.

4. Students will then annotate and listen to Can’t Truss It by Public Enemy.  The task is to follow along and hi-lite text that focuses on MODERN racial issues.  Some of my thoughts in italics)

5. Students will then annotate and listen to Familiar Faces by Rhymefest. Are these issues still current?  Has anything changed?  Can these issues apply to more than African-Americans?  Can you personally connect with this song?  How do we attempt to solve these issues?

All around me are familiar faces,
Worn out places, worn out faces,
Bright and early for the daily races,
Going nowhere, going nowhere,
Hide my head I wanna drown my sorrow,
No tomorrow, no tomorrow

[Verse 1:]
They say don’t put off tomorrow what you could finish today,
(I say) The rest of your life’s only seconds away,
(I rate) Success of a life by decisions we make, (powerful three lines here – how do we break out?  Find success?)
(I hate) The fact that they judge every step we take, (who are “they”?  Who judges us?)
(I can’t) Wait for the Lord, Revelation’s my fate,
(I paint) Pictures with words, fuscia teals and greys
(I shine) Hot as the sun you can feel my rays,
No wait you can feel my rage!
I’m burning inside, nobody can speak my language,
We all wanna be different, but we doing the same s**t,
Wear the same clothes, same chains, same cars,
Got the same goals, wanna be the same stars,
Same heart break, we carry the same scars, (what are those scars?  What unites us as humans?)
I carry the same scars!
And when you finally made it, there’s no real friends just smiling faces.

[Verse 2:]
It doesn’t start on our birthday,
Half of us wasn’t planned in the first place,
The other half of us was given everything they got,
There you have it, the have and the have-nots, (this is the theme throughout history – connects to Nat Turner and Can’t Truss It)
I was born on a black spot,
My life’s a plane this song is the black box,
Put it on heat it, it will find a five minute’s of a genious the world will never see it,
Never believe it, It’s in our palms but we can’t seize it,
Within our reach but we don’t reach it,
Don’t tell me that I can’t be it,
I have the one till it ain’t even,
I ain’t leavin till I ain’t breathin, (leave it all on the field.  Take advantage of your education)
No apologies, no tears, no emotions, no fears,
Look at my face you can’t even see the years,
But carved in the tree are the words “I was here”. (I LOVE THIS LINE – so powerful)

[Verse 3:]
NO!
No one can tell you what you oughta be, (YES!)
(My) My silent thoughts are heard audibly,
(It’s) It’s like people don’t have ta talk to me,
Their body language speaks louder just when they crossing me,
Brushing me, bumping me, touching me, I can feel their energy,
Hating me, loving me, cocaine and hennesy,
Mix it with ego’s music models and industry,
It’s hard to separate reality from fantasy,
So does it matter if I’m here or not,
If I was around could you hear the shot?
Would my father miss me, you think a tear would drop?
Would the world stop spinning and the clock stop?
I think not.

AN EXAMPLE OF STUDENT WORK FROM THE FAMILIAR FACES song – this is from a student who usually doesn’t write beyond one or two sentences.

Chorus – “too many people around him going nowhere in life and he believes it’s affecting his future, their behaviors rubbing off on him”

Verse 1 – “Don’t wait to make things happen, anything can be done in the moment and you never know when the end (of life) is, so don’t regret not doing because of procrastination.  Everyone has obstacles, be the one to overcome them.”

Verse 2 – “Never give up, you were able to be anything since BEFORE birth and you have to persevere, never give up until you have breathed your last breath”

Verse 3 – “You don’t need words to communicate your action and body language says an entire conversation and if I/he (Rhymefest) was gone, the world would miss me

Question 1 – React to this song – what did it make you think about? – “When I went to a restaurant when I was younger, I walked in with my mom and step dad and everyone was staring at us weirdly – so we left asap.

Question 2 – Summarize the meaning of this song – “Never give up no matter the situation given or obstacles coming your way – you don’t know when your time is, so make the best of it!”

1. Students will then answer the Malcolm X questions and we will pair/share. (see Powerpoint)

2. Class discussion will then focus on Ferguson and the upcoming grand jury decision and potential impact.

3. Students will then watch a short documentary from the movie, Amazing Grace (it is included in the DVD extras) centering on the US slavery museum and modern day slavery.

4. Students will then write and reflect on the above documentary by responding to – If not you, who?  If not now, when?

5. The lesson will then end with a discussion of modern day slavery (from the homework articles) and what we can do about it.

This lesson allowed me to share my adolescent experiences growing up in Philly and the music I listened to – I was also able to talk about the history of Hip-Hop and how it was once a political movement (different from much of contemporary Hip-Hop and artists’ need to describe their car’s rim sizes, treating women badly, etc).

I was impressed how the students turned Jefferson’s words into a much broader definition to include the rights of women, homosexuals, religious beliefs, special needs children, etc.  I have to say that my realistic (read pessimistic) self was impressed with the enthusiasm and positive outlook of my students on current society.  My classes are made up of all races and economic backgrounds – most students gave the USA a 75% grade and noted that we are moving in a positive direction.

It was great being able to play the songs rather loudly so that students walking through the halls could hear and wonder what was going on.

The students remarked how much they enjoyed the lesson and how they were forced to think and consider new opinions.  I smiled as the discussions were extremely animated and passionate – if one just walked into the class, they might wonder if I had lost control.  But – the students were 100% on task and wanted to share with each other about their interpretations of the graphic novel and other opinions.

This lesson takes place in a European/Western Civ course — we obviously strayed a bit from the official curriculum – but I thought it was important to bring in some non-white faces in the role of not victims, but resisters and “doers.”

Having the students draw, listen to music, get up and line the room, small group discuss, etc — we really hit all the types of intelligence and got the blood moving.

1. For each of the pages assigned, briefly describe what is going on in the graphic novel.  Be sure to use specific textual evidence.

2. Write down any questions you have – what did you not understand, what do you want to know more about, etc.

3. Describe the one scene that stood out to you the most and explain your choice.

3. Brainstorm – what you you think YOU, or the class, can do to help end modern day slavery?

4. Homework – bring in a current news article describing slavery in the world today.

The author of the Nat Turner graphic novel referenced this American Civil Rights activist in his introduction.  What does this quote mean?  According to Malcolm X, what does someone need to do in order to be considered an American? 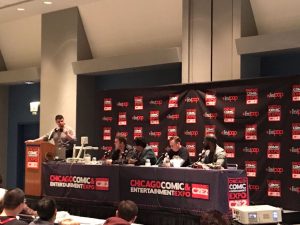 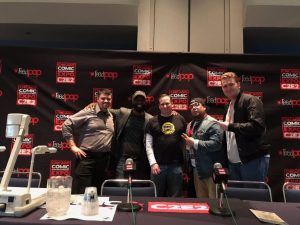 Rhymefest was on a panel with me at C2E2 on 4/21/17 – such an awesome person who believes in the power of comics in education and as a literacy tool.  Here is part of what he had to say – https://www.pscp.tv/w/1MYxNAZmzAvJw